Hey. You wanna fight some things? To protect those you love? Because you crave the rush? Or simply get to stronger? Who knows. Anyway,

There will be enough spoilers in here to sink a battleship! when I saw this, I was

instantly hooked. One Punch man is wonderful breath of fresh air from the usual drag. (I will get to one punch man, Promise!) When I say usual, Dragon Ball Z would be what comes to mind first. If you didn’t notice, Vaccine man has a rather striking resemblance to a certain namekian.

Hey, It’s Piccolo! I can justify bringing the show up now. Generally speaking, Dragon-ball tends to consist People yelling while making bits of dirt fly into the air from their “giant flaring auras of absolute power”™. And wielding enough power to destroy entire cities with a mere flick of the hand. Powerful enough to be thrown through a mountain and not even blink. 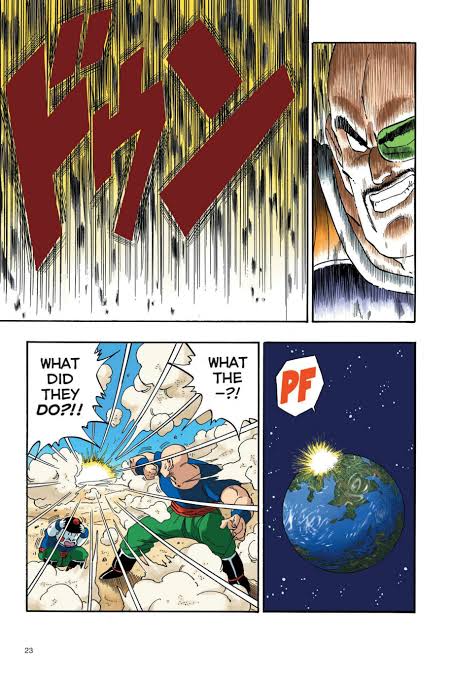 Say you’re outnumbered and blasted in the back? Don’t worry, They can’t hurt you! Their power levels are so puny it only tickles! Let your guard down and it’s over. When we Lose the ability to be ambushed or outnumbered it is no longer grounded in reality and any of it becomes meaningless in my eyes. Power is always relative to something. What is the point of reducing the galaxy to ciders? Who could wield such power?

There is another thing Dragonball likes to do: feature expert martial artists who trained for years, simply for the next big villain to swat them around like a little toy. (good luck in Dragon ball if you are not a sayian) Better go train some more. And do it again. And again. And again.. did you learn some legendary technique? Well, too bad! It’s useless now. It took Roshi 50 years to learn the Kamehameha. Now it’s a joke. Or the worst culprit-Super sayain. A legendary form only seen once in a millenia. And now, it’s a child’s plaything. And beaten by Androids, too! Why was it like that? the author wasn’t allowed creative freedom (epic fights sell, duh!). This is probably why the quality declined into what it was in Dragon ball Z. Why do I make mention of this? I find Most Shows these days take some form of inspiration from it, especially japanese cartoons. I can see a bit of Goku in almost all of the protagonists in the Shows popular in the west.

Maybe it just isn’t my cup of tea. I want a real story, Not A thinly veiled game of endless one-upmanship. Do some people even care about these characters other than their powers? Their hopes, Their dreams? And not to mention that

Being “stronger” than your opponent does not nessecarily mean you will win. Without being challenged, you never need to feel the need to give it your all. Superman is a prime example. He never needed to excel, just walk through the bullets. Martial arts? Technique? Why bother?

I guess I find that it isn’t just comedy. It’s more than that. After all, Comedy and tragedy have always gone hand in hand. Saitama lives in a world where inhuman beasts rage and ordinary people are powerless to stop them. Without him, wouldn’t it feel rather bleak? 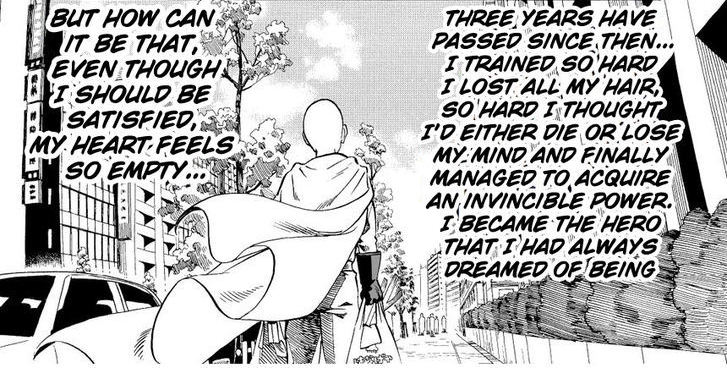 He Lives alone in a ruined section of the city with almost no money. And who could forget his Workout Routine? 100 push-ups, sit-ups, and squats, along with running 10 kilometres every single day. Now, This is obviously poking fun at some of the more Ridiculous origin stories that people like to create. (also, There is nothing superhuman about it). Fell in a vat of toxic waste? Instant superpowers! Got electrocuted? Now You’re the Flash!

“It’s Not supposed to make sense. That’s the joke.So Saitama Doesn’t get to struggle. Nor feel the thrill of battle. And that is something he longs for. The Giant he defeats touches on this as well. No challenge at all. Then a Rather handsome cyborg comes along and things get interesting.

I guess the characters in this don’t really have much explanation. That’s another thing the show pokes fun at: Backstories. Anyone who reads lots and lots of comic books, be they eastern or western quickly figures out that almost everyone has to have some tragic sob story for why they became a monster or a villain. I mean, It’s a genre requirement. Saitama has a rule: shorten it to 20 words or less! It’s a hilarious scene.

We’ve all heard them all before:“I grew up in the sewers, in the squalor and waste. And now, I will see your world burn.” that’s a really common one. Or: “I was a orphan, People hurt me, So now I hurt the world back to survive.” It’s a darwinian world. The Strongest shall survive/rule!” It all becomes meaningless noise after the same back story is

played straight for the 100th time. Some might say it’s deep, But it isn’t. It’s the appearance of depth, nothing more.And We couldn’t forget the heroes in this universe! That would be sloppy. They’ve even formed the hero association, where aspiring caped crusaders can join the fight against evildoers.

Though Most of them are so conceited they don’t realise they are powerless against the truly strong monsters, and are only interested in petty politics (like the tank top brothers.) or increasing their rankings. Along with Flashy combo moves with grand sounding names. 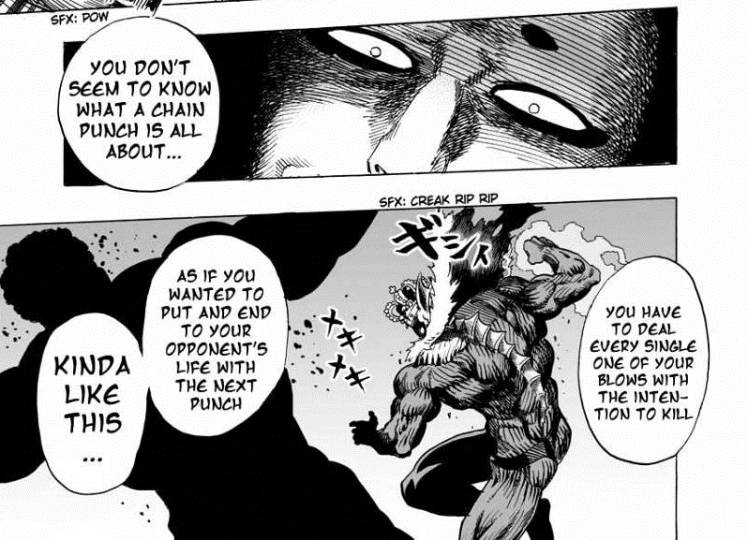 Prui Prui prisoner Promptly gets the snot kicked out of him.The Sea king quickly pulls the heroes back into reality. He knows what’s up. Are you trying to look cool or actually inflict bodily harm? Oh, and before I continue, I found licence-less rider’s monologue rather touching. He knows he can’t win, But if he doesn’t, Who Will?He stands his ground. He knew he couldn’t win. He’s just fortunate saitama arrived in time.Though the peace and quiet is short lived. Alien show up and blast the city. Saitama meets Lord Boros, Ruler of the Universe (also, He’s a Son Goku Refeference, Complete with spiky hair, flashy transformations And something that ‘totally’ isn’t kao ken *cough cough 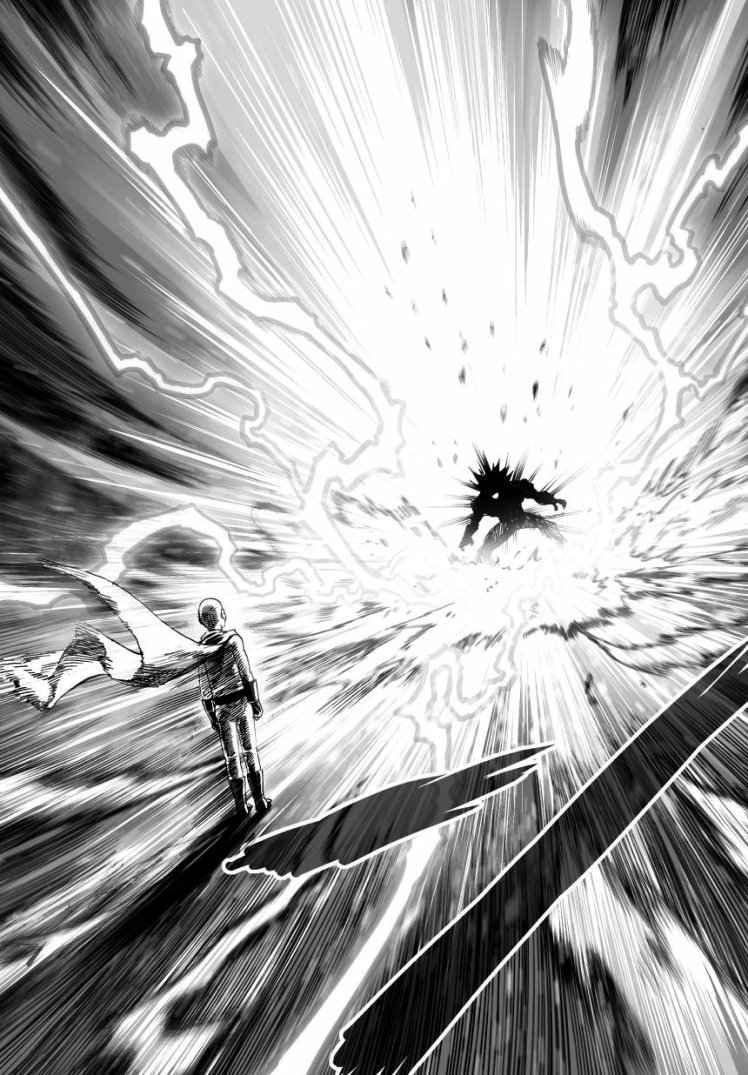 Boros is thrilled, and rushes into the fray. He doesn’t even care that his spaceship is being destroyed by their struggle. He’s absurdly powerful, even kicking saitama to the moon at one point. But even that hardly phases our titular hero, and falls like the rest.

I find One punch man speaks about the folly in seeking great power at the expense of our humanity. This theme is mirrored in Mob Psycho, the authors other work. Mob is a shy teenage boy who has amazing telekinetic abilities, but has no friends and doesn’t know how to deal with his emotions. But as the series goes on, they both form genuine connections with the people they meet, and find meaning and genuine happiness in the company of others.

Is being the strongest really what we want? Or do we dream of being a part of something bigger than ourselves?

Have a good one.