Have you ever heard something called “psudoscientific?” After a while I started to wonder what it meant.

You see, I’ve been researching ‘alternate’ theories for some time now. And yes, there are some rather wacky fringe-theories out there (they deserve all the scorn they get). Personally I find this most infuriating in the field of archeology. you have clearly man-made stones lying around on the ocean floor and people are stubbornly insisting they are natural formations! Why? Because They have their theories, and anything that doesn’t fit into them gets lopped off.

It Reminds me of Why dark-matter was invented. Because the model of the universe didn’t match the data. I recall Terry pratchet musing on this rather cheekily by noting how convenient it was that it was dark, cold, and a number of other things that made it impossible to detect with any of our equipment. Almost as if it only existed as some kind of magic theory-saving substance?

That’s just an example. I’ve thinking of late about how many potential sites of interest are ignored. Oh, and I wanted to read the greek epics on the war of the titans! But, apparently they are mostly lost. instead, my perusal of Wikipedia finds me this: 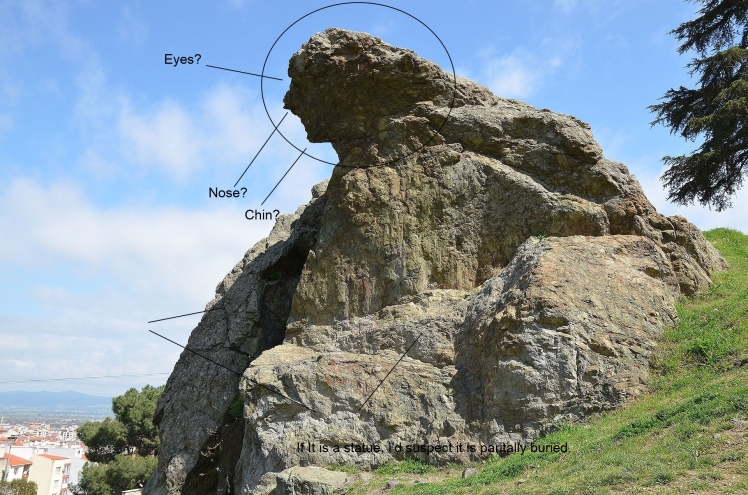 Now, this is supposed to be a natural formation located near mount sipylus that is associated with a deity. But, To me? I can’t help but wonder if I’m looking at a statue that is eroded to the point of almost being unrecognisable. The part in question has a diferent pigment as well. I can see shoulders, but when things degrade to that point it’s hard to tell. But according to mainsteam logic, this is completely natural formation! When I go for walkscI often see stuff that looks man-made (flat faces/hard edges) You point them out to people, and they just dismiss them immediately. It MUST be natural. Why? Because! It does. And here in australia, the Aborigionals didn’t build anything. So who did? The colonists?

But That’s something I come up with in about 5 minutes. What if you devoted years of study to this? There are a series of books published in russia, written by a man named Anatoly Fomenko, Titled: History, Fiction or science? They ask questions that are not too dissimilar to mine. Now, I’ve not read any of these books, I must confess. There may be some problems with them, or I might not agree with all of it. But if you look at the Wikipedia article for it? They’ve labelled it as “pseudoscientific” to quote a paragraph:

“The New Chronology is rejected by mainstream historians and is inconsistent with absolute and relative dating techniques used in the wider scholarly community. The majority of scientific commentators consider The New Chronology to be pseudoscientific.”

So, his new, alternate theory on chronology doesn’t line up with current theories about dating. You don’t say! What on earth does pseudoscientific even mean? Well, I was paying attention when my teacher explained the scientific method to me. I recall believing it was unreasonable and unrealistic.

Here’s the shortened version: Emotions mustn’t cloud your judgement, nor what you want to be true. your conclusions must be evidence based not on conjecture or wishful thinking.

That’s the jist of it. Thing is, It turns while it’s a great ideal to strive for, Most people can’t actually do that. So instead we get a sort of enviroment where anything remotely new is met with rather harsh resistance. facts get twisted to suit the popular theories of the day. though the truth can often be found in the informal notes of those working on it, bizziarely absent from the published versions, however. People know they are telling lies. And the worst part? I suspect many of them hate every minute of it. Most of the time when people try and speak up thet get labeled fringe theorists and nutcases, ruining their repuations forever.

I mean, people often joke about how reliable can a study be that claims Pepsi max is great for you that is funded by The company that makes the product? This seems eerily similar in a way that just makes me sad inside. When I was little, I wanted to grow up and be a scientist. it didn’t matter what kind. Someone smart. I was going to have a lab coat, and some assistant… I feel rather betrayed. A broken pedestal, if you will.

Even if they wanted to tell the truth, they can’t. They will lose their reputations. And If they push too far, their jobs. Why is there such a stranglehold on freedom of inquiry? Even this kind of thing is wrong, What happened to Entertaining different ideas in our minds, as Aristotle advocates?